Birthplace of Boeing, capital of coffee and home to hipsters from across the country, Seattle is the largest city in the Pacific Northwest and one of the quirkiest in the United States. Seattle tourism ignores the city's reputation for grey skies and rainy weather to focus on its eclectic cultural attractions and reputation for fun. There are plenty of sights to take in too, from the iconic Space Needle to bustling Pike Place Market and the serene surrounds of Puget Sound, ensuring Seattle packs a punch with visitors. But what sets it apart from other cities is its abundant natural beauty, making Seattle an ideal destination for nature lovers and culture vultures alike.

Seattle's most famous attraction is the soaring Space Needle which dominates the city skyline. Built for the 1962 World's Fair, the striking 184-metre high structure has been used in countless depictions of the city. Take the lift to the observation deck for stunning 360 degree views. The city's other major attraction is the Pike Place Market overlooking Elliot Bay and spending hours trawling for hidden treasures is one of the most popular things to do in Seattle. Opened in 1907, the market is the place to go if you're after a unique local experience or simply looking to escape Seattle's notoriously drizzly weather.

Seattle is a serious food town and is often rated one of the best places to eat in the United States. If you're not keen on picking up some fresh produce at the Pike Place Market, head straight to arguably the most famous Seattle restaurant in town – the legendary 5 Point Cafe. If atmospheric dive bars aren't your thing then Seattle boasts plenty of upscale options, including the popular Dahlia Lounge and French restaurant Le Pichet. If seafood is a speciality of the city, so too are dive bars and old-world taverns, while Seattle also boasts several prominent breweries, many of which sell their brews on tap in bars around the city.

The city's reputation as a premier tourist destination ensures high quality Seattle hotels are readily available. The Green Tortoise Hostel is a popular budget option as it's located across the street from the famous Pike Place Market. For a more upscale experience, the Crowne Plaza Seattle Downtown offers views of the Space Needle from its well appointed guest rooms. The appropriately named Edgewater is perched on the picturesque shores of Puget Sound and is one of Seattle's most historic hotels. For a true taste of opulence, the Fairmont Olympic is perhaps Seattle's most luxurious hotel and is located in the heart of the downtown district.

The Pike Place Market takes most of the headlines when it comes to Seattle shopping, however there are plenty of other places to pick up a bargain. Naturally the city centre is home to several fashionable department stores, including local favourite Nordstrom. Take a trip to the northern suburb of Fremont for more boutique items, with the popular Sunday Market specialising predominantly in handmade jewellery. The streets and thoroughfares surrounding Pioneer Square are another great shopping destination, where art galleries and second-hand bookstores blend in with the Italian restaurants and trattorias popular in the area.

Ever wondered what makes Seattle so unique? Perhaps it's the abundance of coffee shops serving steaming hot cups of the finest roasts available. Seattle is of course the home of Starbucks and the original store is still located at 1912 Pike Place. These days Starbucks is a multinational conglomeration, however the city still boasts numerous owner-operated coffee houses in which you can escape the gloomy Pacific Northwest weather. When the sun does shine, Seattleites love to get out of town to explore the region's scenic mountain ranges, its expansive ancient forests and its breathtaking coastal roads. 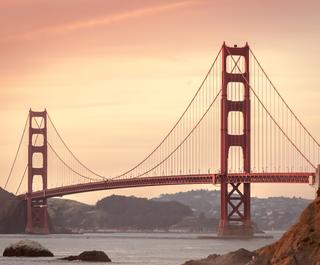 Awesome scenery, gorgeous coastline and three of the United States' most exciting cities – the journey from San Francisco to Seattle needs to be on every road tripper's bucket list. A motorhome drives through Northern California's redwood forests. Photo: iStock Be prepared to get a sore neck. There, you've been warned. more >
San Francisco Seattle USA North America
See more travel experiences from our Blog » 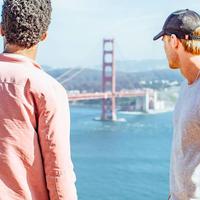