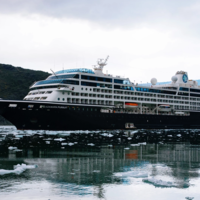 The summer months between November and March make up Antarctica's main cruise season. During winter, the ice extends and the region becomes too dark and cold to safely travel around.

December and January, when temperatures are at their highest, offer the best conditions for exploration and wildlife spotting. During this time, cruisers can expect to see penguin chicks emerging and sizeable seal colonies. For whale watching, the best time to travel is between February and March.

Skirted by the Southern Ocean, Antarctica is the world's southernmost continent. At 14 million square kilometres, it's close to twice the size of Australia and the fifth-largest continent on earth.

Antarctica has been known to feel temperatures as frosty as minus 89 degrees Celsius, earning it the title of the coldest, windiest and driest continent in the world. Given that Antarctica receives very little rain or snow, it is actually classed as a desert!

Antarctica was largely ignored until the mid-20th Century, due to its remoteness and harsh environment. In 1959, 12 nations signed the Antarctic Treaty to protect its ecology and support scientific research. To date, 49 countries have signed the treaty. While there are no permanent residents, between 1,000 and 4,500 researchers reside here at any given time.

Did you know..?
Fossilised trees show that Antarctica once had a temperate climate and tropical forests some 250 million years ago, although it was submerged in 24 hours of darkness during winter and the converse amount sunlight during summer.