Negotiating the backwaters of Kerala in India

A chain of lakes and canals stretching through southern India, the Kerala backwaters are a world away from the nation's chaotic urban centres. Brett Atkinson hops aboard a traditional Keralan barge for a lazy three-day journey. 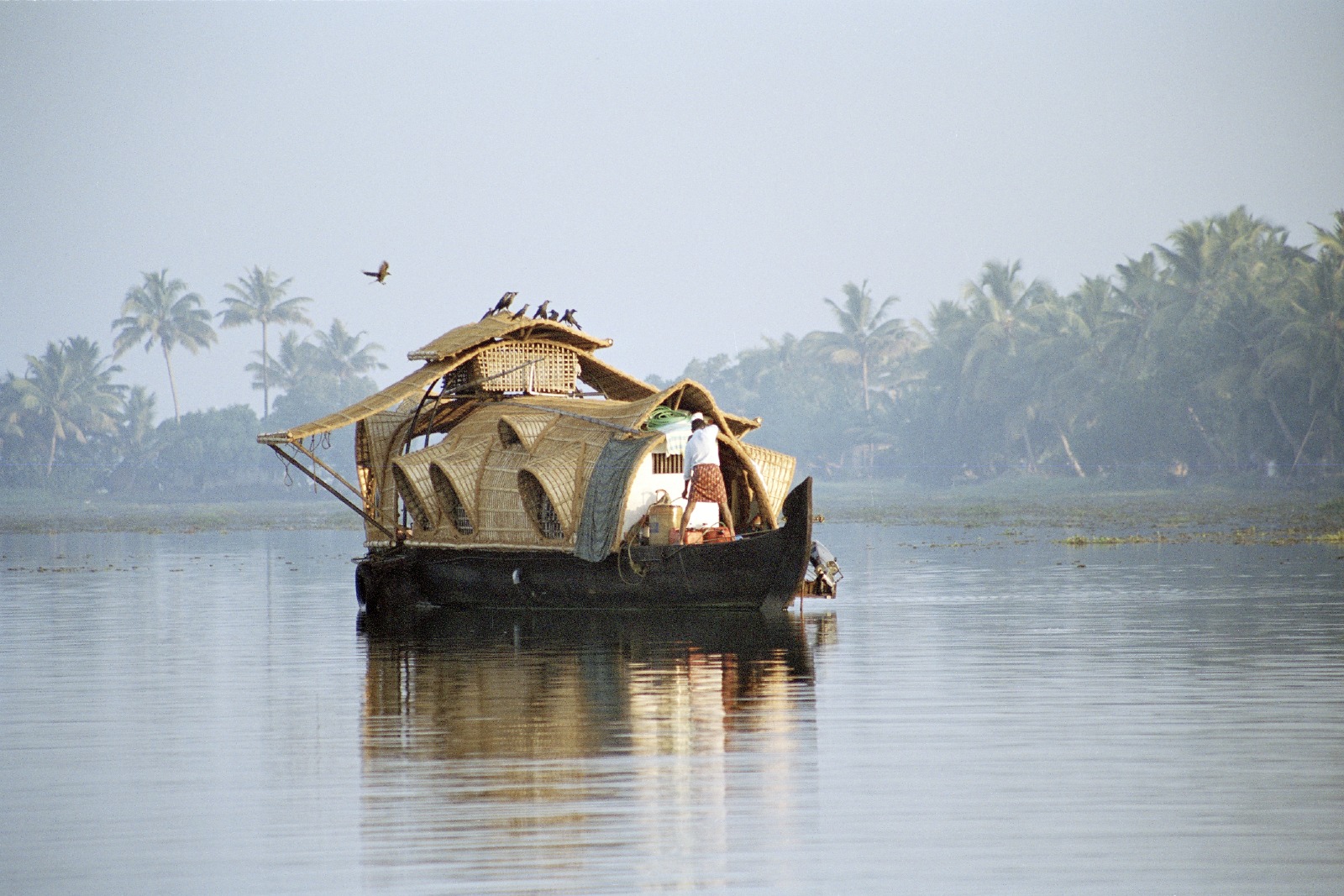 India and relaxed: two words you normally don’t see together. From the flow of curious humanity that envelopes you at the train stations to the crazy diesel-fuelled urban maze of traffic in some of the planet's biggest cities, visiting the Indian subcontinent can be hard going even for experienced travellers. Challenging and thrilling, infuriating and life affirming – but hardly relaxing. That's why drifting through the tropical maze of bamboo-framed canals and shaded riverine backroads of Kerala is such a surprise.

The meandering backwaters of the southern Indian state that proud Keralans also call 'God's Own Country' stretch for over 900 km. Inland lakes are linked by river tributaries and canals to produce a unique ecosystem, and at the heart of the area are sprawling Lake Vembanad and the Kumarakom Bird Sanctuary.

Birds quickly become the theme for our backwaters experience as we board our kettuvallum in Alleppey. We’re hoping to see egrets, herons and Siberian storks, all migratory visitors to the area from November to February. 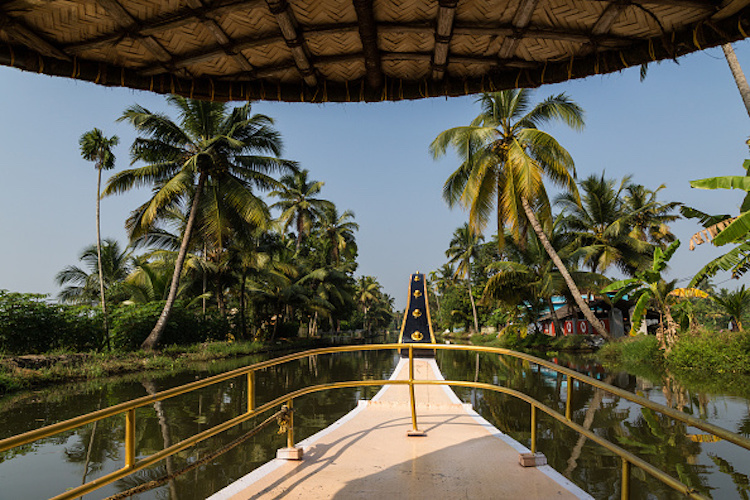 The view from a kettumvallum. Photo: John S Lander/LightRocket via Getty Images

A kettuvallum is a traditional Keralan rice barge, and some have been adapted for tourist accommodation and travel around the backwaters. Luxury kettuvallum are very flash, with additional levels and bulky air-conditioning units tacked on the back. Ours is more humble, just a single level, but still very comfortable with a cosy private bedroom and bathroom. Cool breezes wafting through tropical groves mean we don't miss the absence of aircon at all.

It’s intensely relaxing drifting down narrow canals past local schools, villages and riverside markets. Anchored in the middle of the lake with the engines off, there is virtually no noise. It’s almost an unsettling experience, given the surrounding intensity of India. 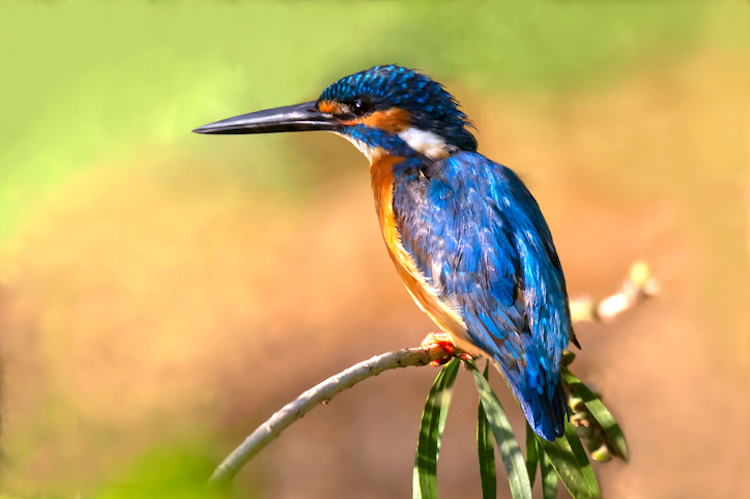 We have a three-man crew, two to operate the barge, and a cook who surprises us for two days with always interesting meals. Curries, chicken and fish all feature, along with fragrant and fiery Keralan vegetarian food. Cool Kingfisher lagers from an ice box provide crisp sundowners each night, and slightly too sweet local tonic water goes well with our bottle of duty free Bombay Sapphire and a seemingly inexhaustible supply of crisp poppadam chips.

Phones are switched off, watches are jettisoned, and our daily routine is governed by the ebb and flow of natural light as we awaken at dawn on the misty lake. Wildlife is governed by the same natural laws, and each morning white egrets are perched on the elaborate fishing nets first introduced to the area by Chinese traders six centuries ago. Fish eagles swoop and dive in the tropical dusk, and a stout iridescent kingfisher hitches a ride one morning. Even our cook is inspired by the bird life and makes us individual curried potato birds as a special entrée. 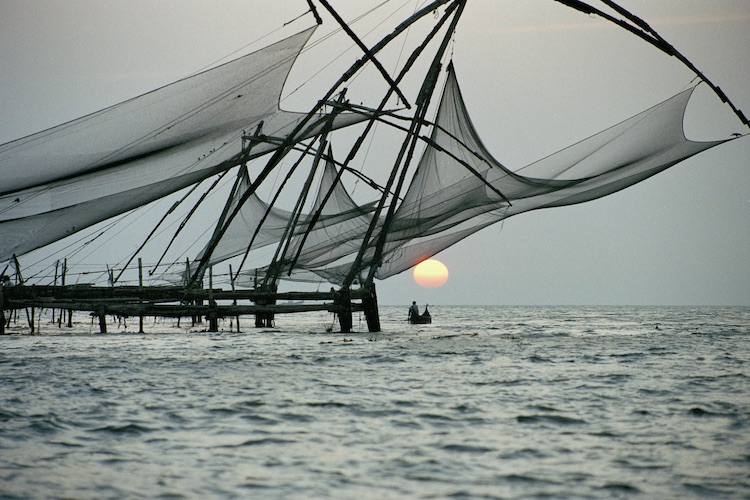 After three days and two novels effortlessly devoured in languid Indian daylight, it’s over all too soon, and our driver picks us up near the town of Kollam.

He’s a bird fan too and clearly interested in both cricket and New Zealand. After the usual one breath, non-stop amalgamation of 'Kanewilliamsonstephenflemingandrichardhadlee' he proudly tells us about the 'Kiwi birds' he sees at the cricket on television in New Zealand.

We don’t have the heart to tell him they're actually seagulls!