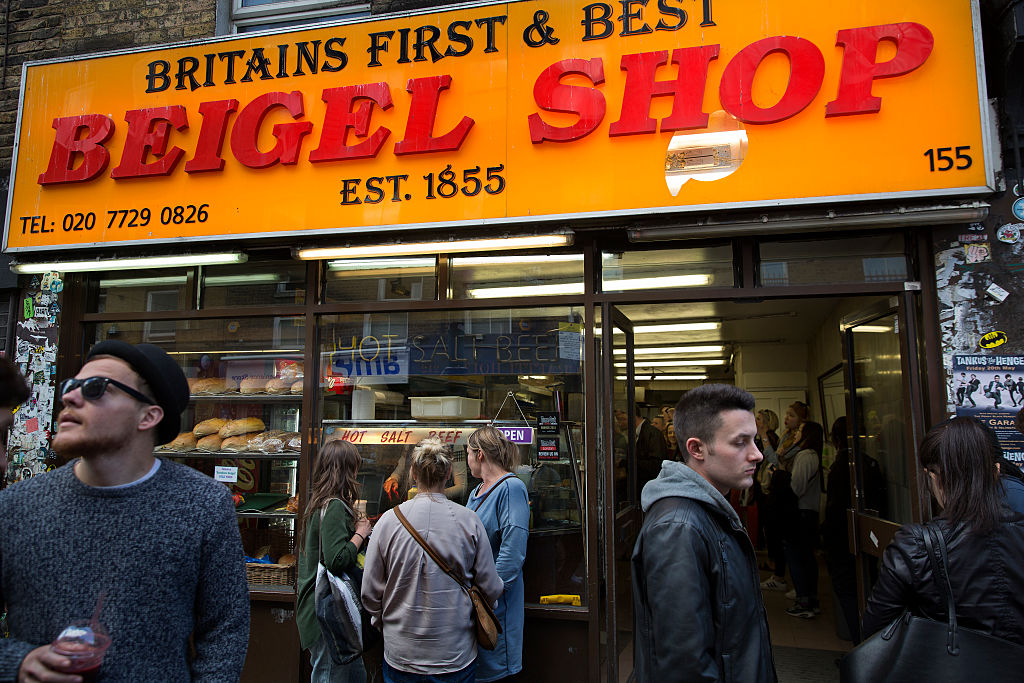 The East End is less a location than a state of mind. Anyone can cross its borders (the City's gleaming towers to the west and the drab River Lea to the east, though the precise boundaries are up for debate), but that doesn't mean you've arrived. You go to East London; you're born in the East End.

For many years I lived in the heart of the putative East End, not far from the pub where Ronnie Kray shot George Cornell at point-blank range one winter's night in 1966. Every morning I'd pass G. Kelly, a “noted eel and pie shop” (it says so on the sign) that's been serving pie and mash and jellied eels since 1937. But the only time I felt anything like an East Ender was while waiting in line at Brick Lane Beigel Bake, the 24-hour bagel shop beloved by locals of all stripes.

Long before the Kray Twins were a gleam in their father's eye, the eastern side of London was almost entirely Jewish. By the early 20th Century as many as 130,000 Jews lived in the streets around Brick Lane, a long and narrow thoroughfare connecting Whitechapel to Bethnal Green. It was they who baked England's first beigel (pronounced “bye-gel” and later Anglicised to “bagel”) and it's their descendants who run Brick Lane Beigel Bake today

If you're looking for the real East End, you'll find it here: service is brusque, the floors are grubby (being open 24 hours doesn't allow much time for cleaning, to be fair), and it's cheap. Really cheap. A plain bagel is a paltry 25p (around 60 cents); with cream cheese and lox (salmon) you'll pay £1.60. The cream cheese isn't that great, and they don't bother with chopped dill or capers. But still: £1.60. In London.

At those prices, it's not too difficult to believe their claim of 7000 bagels kneaded, rolled, boiled and baked every single day. Varieties include plain and... actually, that's it. They don't do pumpernickel or poppy seed or gluten-free whatever, and they won't toast them for you or make you a flat white while you wait (they do however mix up a decent Ribena to go: 60p).

Beigel Bake's bagels are on the small side, with just the right amount of snap to the crust when you take a bite. Inside they're properly chewy and dense. They're good with just butter, or with salami, or chopped herring. But for the full Beigel Bake experience, you need to order the hot salt beef bagel. Salt beef is what we know in New Zealand as corned beef; at Beigel Bake it's cut into thick, meltingly tender slices and stuffed inside a fresh bagel with a gherkin and a smear of mustard. Glorious.

There's nowhere to sit so you'll likely eat your bagel while wandering the markets – Spitalfields, Brick Lane and the Columbia Road flower market are all nearby. At night you'll scoff it under the blinding-white neon sign as you wait for a cab and regret that last pint. And if you're really smart, you'll have bought some plain bagels to take home for breakfast – I preferred mine toasted with Marmite. Like I said: not an East Ender.

A few doors down from Brick Lane Beigel Bake is Beigel Shop, otherwise known as “the yellow one”. The two are so similar it's spooky – same menu, same 24-hour opening, same curt service. They're so nearly identical that rumour has it the same family secretly owns both. But the queues tell the story: Beigel Shop is popular, while Beigel Bake is beloved. So much of old East London is gone, replaced by organic juice bars and cafes selling $10 bowls of cereal. Meanwhile Beigel Bake, the original East End fast food joint, keeps rolling on.