A relative youngster to the international cruising scene, Oceania prides itself on providing a premium onboard experience with fascinating and carefully planned itineraries, at a lower than expected price.

Formed in 2002 by luxury cruise industry veterans Joe Watters and Frank Del Rio, Oceania Cruises is the world’s only upper premium cruise line. Cuisine, Comfort, Service and outstanding value are the pillars that define Oceania Cruises’ five-star product and have positioned the line as the cruise company of choice for travelers seeking a truly refined and casually elegant travel experience. Our intimate and luxurious ships allow you to explore the world in unequalled style and comfort. Sophisticated, stylish and distinctly mid-size, you’ll find the onboard atmosphere is extremely convivial, and with an unrivaled level of personalized service as a result of us having two staff members for every three guests. As the leader in destination cruising, Oceania Cruises sails to more than 330 ports around the globe. Itineraries are unique in that they call on the perfect mix of must-see marquee and boutique, off-the-beaten-path ports. Multiple overnight calls afford an in-depth, enriching destination experience and allow travelers to immerse themselves in the cuisine, culture and history of the ports we visit. Oceania Cruises, with headquarters in Miami, is owned by Prestige Cruise Holdings.

Oceania Cruises have been at sea since 2003. Established by two cruise industry veterans, Oceania is still a relative youngster yet the cruise line has quickly established itself as a top choice among discerning cruisers. Oceania prides itself on providing a premium onboard experience with fascinating and carefully planned itineraries, at a lower than expected cost.

The fleet of four Oceania ships take in destinations throughout the Mediterranean, Northern Europe, Scandinavia, South Pacific, Australia, New Zealand, Alaska, Canada, New England, Asia, Africa, South America, the Caribbean and Panama Canal, as well as transoceanic cruises. The onboard ambience is one of relaxed sophistication and there is plenty of socialising in the numerous public areas – all elegantly fitted out. Days at sea may be accompanied by live jazz, and evening entertainment is just as sublime.

Mostly adults; couples and retirees who appreciate the relaxed and sophisticated onboard ambience make up the majority of passengers. An absence of children's facilities is off-putting to most young families. Around the Boot - Monte Carlo to Venice Pathway to Iberia-Miami To Lisbon 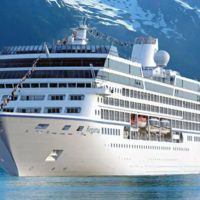