Once the weekend playground of Hollywood celebrities and European royalty, the magnificent Hearst Castle is today an essential stop on any road trip from LA to San Francisco. Brett Atkinson takes a tour.

San Simeon, on the rugged central coast of California, is probably the only place on the planet to see elephant seals and zebra in close proximity. The giant marine mammals, some weighing up to 2000kg, have no doubt been lolling around on the beach at Point Piedras Blancas for thousands of years, but the four-legged African interlopers mooching along the road in grassy paddocks are far more recent arrivals. 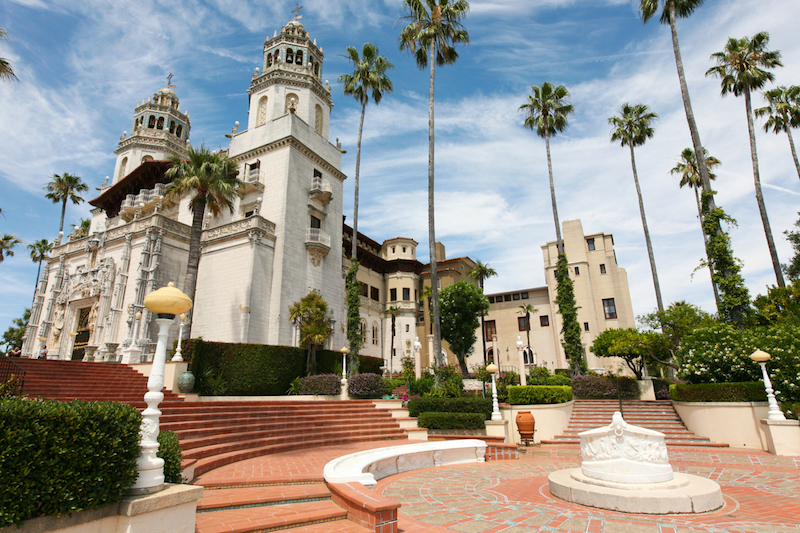 They were introduced by the early 20th-century American media magnate William Randolph Hearst for his own zoo – other species enjoying Californian coastal sunshine at the peak of his wealth and power included giraffes, kangaroos, chimpanzees and orangutans – but now the grazing zebras are the final poignant memories of what was once the world's biggest private zoo. And crowning one of the highest points on Hearst Ranch – now a California State Park – Hearst's astounding residence dubbed Hearst Castle still astonishes through sheer scale and audacity. 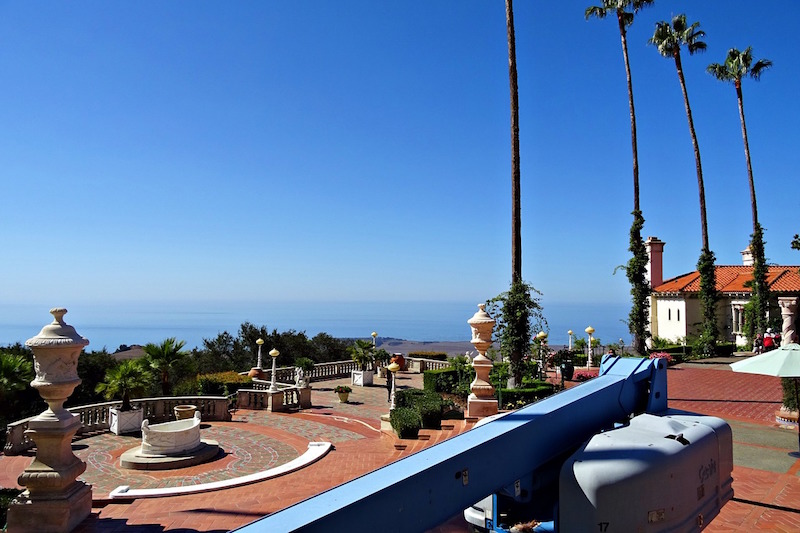 The view from the terrace. Photo: Pixabay

Hearst didn't actually call the sprawling 165-room estate a castle. To the mega-rich owner of newspapers, magazines and movie studios, it was La Cuesta Encantada ('The Enchanted Hill'), and negotiating the 8km winding road uphill from the Hearst Castle Visitor Center, the Spanish cathedral profile of Casa Grande, the estate's main building, is only teasingly revealed amid the jagged folds of the steep hill.  Building on such a remote location in the early 20th century presented huge logistical and engineering challenges, but with a literally unlimited budget, design and construction by Julia Morgan, California's first licensed woman architect, stretched from 1915 until 1947 when Hearst stopped visiting San Simeon due to ill health. 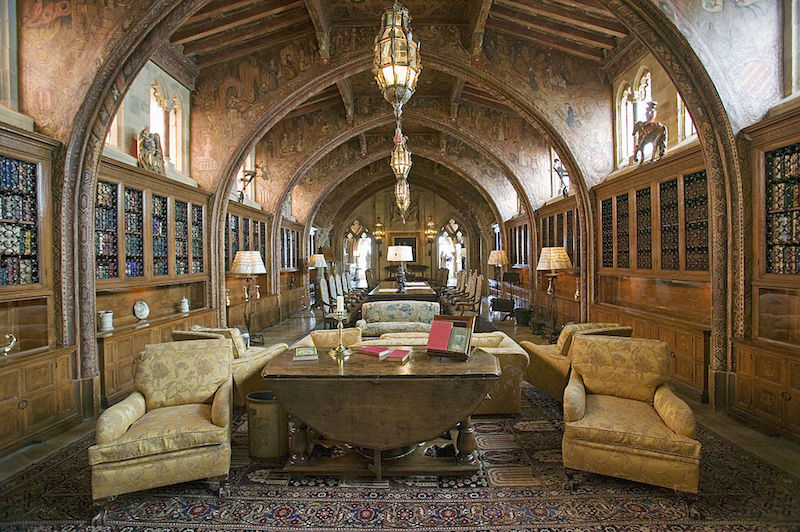 Entering the huge main reception hall of Casa Grande – the entire building is an amazing 5634 sq. metres – it's soon obvious money was also no object when it came to decorating and furnishing Hearst's hilltop dream. He was a frequent traveller to Europe, and always incorporated legendary shopping sprees to pick up statuary and ceramics from the depths of antiquity in Greece, Persia or Moorish Spain, and singular pieces of art, woodwork and furniture from medieval churches and monasteries in France and Italy. In Casa Grande's main hall, priceless Belgian tapestries cover the walls, Italian choir stalls prescribe the edges of the room, and the ceiling is exquisitely carved and equally ancient. 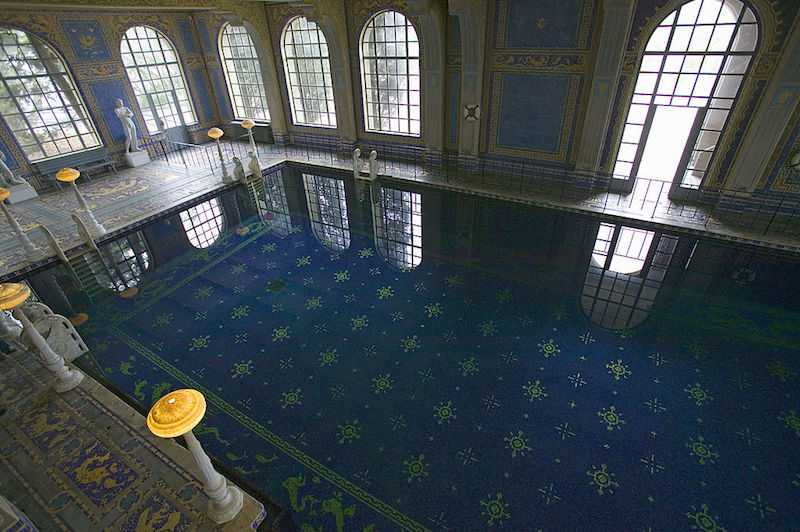 But despite the jaw-dropping array of priceless artifacts on display, an invitation to spend the weekend at Hearst Castle during its heyday from the 1920s to the 1940s was a guarantee of relaxed good times. Regular guests were film stars Charlie Chaplin, the Marx Brothers and Clark Gable, and political visitors included US President Franklin D. Roosevelt and British statesman Winston Churchill. Movie nights, swimming in the estate's astounding Minerva Pool, and marathon tennis tournaments were all essential distractions, and to make sure the mood at dinner was kept inclusive and informal, a stout bottle of Heinz tomato sauce always took pride of place at the table. Occasionally ordinary folk were included on the guest list, and every year Hearst invited the paperboy (and his family) who had sold the highest number of newspapers in the previous twelve months. 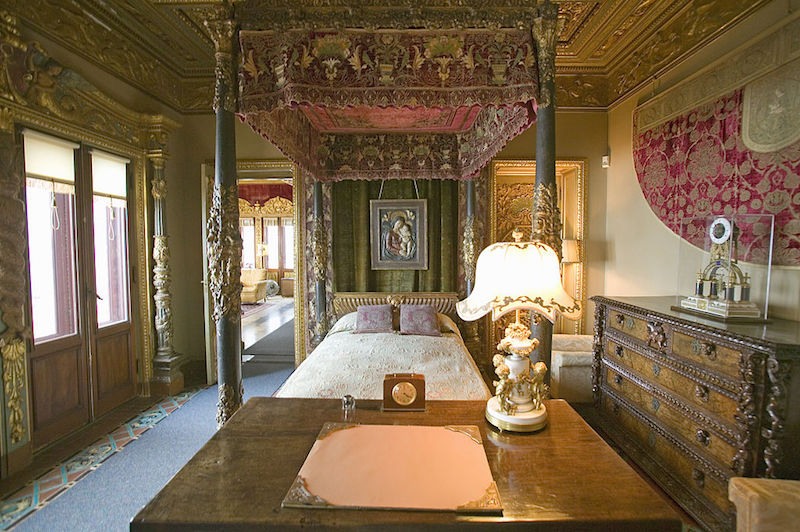 Where you were seated in the dining room decorated with centuries-old banners from the Italian hill town of Siena also predicted how long your invitation might be valid for. Most new arrivals spent the first night seated beside Hearst at the centre of the table, but if you found yourself a few uncomfortable places away from the host on subsequent evenings it was probably time to start planning a return journey back to the civilisation of Los Angeles or San Francisco.

At least guests could look forward to spying a few dromedary camels, antelopes or zebras as they made their way down the hill to Hearst's private airstrip.