Overview
Gallery
Where to stay
Getting there

A country rich in tradition and centuries-old customs, Poland holidays offer a mix of historic cities and natural beauty, all wrapped up in a fascinating landscape.

One of the largest countries in Europe, Poland is both a geographically and culturally diverse nation, with important history, fascinating architecture and wonderful festivals stretching right the way to its borders.

Discover its charm on any one of a number of Poland tours and try hard to pick a favourite between the country's important cities and its lovely countryside.

Any Poland travel guide will list the number of options for arriving in the country. There are six major airports in Poland and flights into the country are frequent. It's also possible to arrive by train or bus from other European destinations, or by cruise ship in the Baltic Sea.

An idea for where to start in Poland is Warsaw, the capital and one of the country's most historic cities. Greatly damaged during World War II, much of central Warsaw had to be completely rebuilt after Nazi occupation.

Grab a coffee in Castle Square then walk through the ancient Old Town to visit the magnificent Royal Castle, Church of St. Martin and the King Zygmunt III Waza Column.

Music lovers won't want to miss the city's Opera House. No stress if you can't get a ticket - instead catch one of the free Chopin concerts, named after the country's most famous composer, held in Lazienki Park. For more contemporary sounds, head to the live music venues and clubs centred around Mazowiecka Street.

If shopping is your vice, check out the Blue City Shopping Mall, a complex of 224 stores known as 'the city within a city', or for a more upscale experience, try Arkadia, the biggest shopping centre in Central Europe and filled with designer stores.

Be charmed by the history of Krakow

Krakow is the country's former capital and was recently named one of Europe's most beautiful cities. Unlike Warsaw, Krakow escaped the majority of World War II bombings. Today its Old Town and Jewish quarter are some of the best preserved in the country, filled with charming cafes, restaurants and boutiques.

Must-see sites are the Krakow Historic Centre, the Main Market Square, the Cloth Hall and the Church of the Virgin Mary.

Another popular tourist destination in Poland is Gdansk, a beautiful city on the Baltic Sea. Although its Old Town was also levelled in World War II, it's since been reconstructed and is now considered a highlight of any Poland holiday.

Other Gdansk attractions to enjoy are the Oliwa Cathedral and colourful Dluga Street, perfect for a leisurely walk and some photo opportunities.

If you are looking for relaxation, Poland has plenty of countryside in which to enjoy the fresh air and beautiful scenery. Warmia-Masuria is the country's lake region and offers camping and rural houses where visitors can get to know Poland's rural charm.

Go fishing in one of the area's abundant lakes or stay indoors enjoying some traditional Polish food like pierogi (dumplings) and kielbasa (sausages) at a traditional tavern. 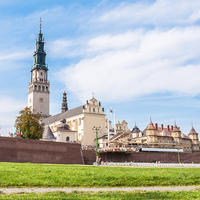